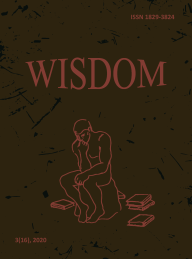 The present issue of WISDOM has been completed under emergency and truly unusual circumstances.

On September 27, 2020, the Azerbaijani ar­my, under the support of Turkey, and involving 4000 terrorist-mercenaries provoked large-scale warfare against the Republic of Art­sakh (aka Nagorno-Karabakh). The Defence Ar­my of Ar­tsakh, the civil dwellings and infrastructures, including the kindergartens, schools and hospitals, the maternity hospital of the capital ci­ty Stepanakert, and the churches were shelled by missile systems, cannons and howitzers, artillery systems “Grad”, “Smerch”, “Polonez”, “Solntse­pyok” (TOS-1А), as well as LORA Israeli missile. The attacked were launched making use of Prohibited cluster and phosphor bombs banned by the respective international conventions, with large-scale use of strike-reconnaissance state-of-the-art drones, aviation, heavily armoured vehicles of Turkish and Israel production.

In order to satisfy their territorial ambitions, Azerbaijan and Turkey, in tandem, have persistently been opposing to the power of argument, the logic of legality, the norms of moral and humanity – this time, supplying their “counterarguments” through military aggression, economic and political terror and military atrocities.

During the 44-day-long war, the Defence Army of Artsakh and the local population had thousands of victims, tens of thousands of woun­ded and displaced people, there were also territorial losses with imposed concessions to the aggressor.

Thus, the present issue of WISDOM is dedicated to the memory of the soldiers and civilians who died for the defence of the Republic of Artsakh.

Since 2018, WISDOM has been involved in the famed Index Copernicus Polish database system that provides an annual report on abstracting and indexing of scientific periodicals. This year, WISDOM is rated as the 6th periodical on Philosophy and contiguous domains among the 500 jo­ur­nals of a similar field of expertise (for further details and verifications, we encourage to follow the link: https://journals.indexcopernicus.com/­search/form?mniswDisciplines=DS010102N&mniswTo=20).

The geography of the Scholars has expanded as well – Armenia, Russia, India, Ukraine, Belorus, and Kazakhistan. Loyal to its stick-to-it-iveness, WISDOM shares the delight and honour of welcoming both renowned scholars and yo­ung researchers of promising scientific zeal and charge.