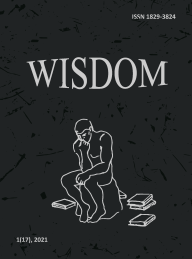 The present issue of WISDOM, like the previous one, is dedicated to the memory of the heroes who died for the defence of the Artsakh Republic and the victims among the civilian population.

The geography of the Scholars is rather wild – Armenia, Russia, Ukraine, Belarus. Loyal to its stick-to-it-iveness, WISDOM shares the delight and honour of welcoming both renowned scholars and young researchers of promising scientific zeal and charge.

On the last cover page of the issue are illustrated the photos of Gandzasar Church Complex – the spiritual centre of Artsakh since the 13th century. Professor Charles Diehl (1859-1944) from the Sorbonne University, a renowned art historian, included Gandzasar, together with four other masterpieces of Armenian monumental art, in the world architecture treasury. The masterpieces are Gandzasar Monastery (built in 1216-1238, Artsakh), Akhtamar Holy Cross Church (built in 915-921, Lake Van, now in Turkey), St. Hripsime Church of Etchmiadzin that is a part of UNESCO historical and cultural heritage (fo­unded in 618, RA), Haghpat Monastery (founded in 10th century, RA), and St. Savior Church in the ancient capital of Armenia, Ani (founded in 1001, now in Turkey).