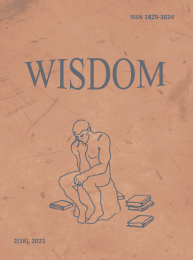 The eighteenth issue of the journal WISDOM is the second volume of 2021 in memoriam Academician Georg Brutian and paying tribute to his 95th  anniversary.  Five years ago,  the 2(7),2016 issue of  WISDOM  was dedicated to  Brutian's 90th  anniversary,  including the materials of the international conference  “Life and  Philosophy” dedicated to Georg Brutian (Yerevan, 2015).

The year 2021 marks the anniversary of Academician  Georg  Brutian.  Therefore,  one of the symbolic tributes to  his  memory is  the achievement  gained by  the journal  WISDOM  founded  by  this  celebrated  scientist. According  to  the  Index  of  Scopus –  SJR  (SCImago  Journal  &  Country  Ranking),  the  journal  WISDOM has  been  recognized within Q2 quartile. As a result, WISDOM  (according  to  Scopus's  SJR data)  is  the  244th  journal  among  the  659  periodicals  in  the  category Art  and  Humanity,  the  26th  among  all  the  journals  in  Philosophy  of  Eastern  Europe, and the 7th– among the journals published in CIS member countries. We consider it to be a unique recognition  of  the  Armenian  Scientific  Thought  as such ranking is unprecedented among the scientific journals of Armenia.

The  geography  of  the  authors  who  have  contributed has been broadened – Armenia, Artsakh, Russia, Iran, Slovakia, Ukraine, Kyrgyzstan.

On  the  back  cover  of  the  issue,  you  will  find  some  eminent  scholars  opinions-testimonials  on  Georg Brutian’s scientific activities.