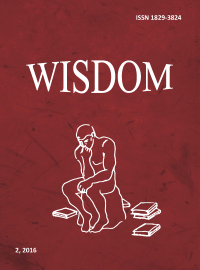 The distinctiveness of the volume reminds us the days of its establishment and entry to the world of scientific periodicals. The publication of the first issue in 2013 by Academician Georg Brutian was remarkable since it was compiled from the results of the international conference Theoretical and Practical Issues of Transforming Society Development: Philosophical and Psychological Aspects (April 16-17, 2012, Yerevan) organized under his presidency. Khachatur Abovian Armenian State Pedagogical University (ASPU), International Academy for Philosophy (IAPh) and Armenian Philosophical Academy (APA) were the organizers of the conference. The first two issues of “Wisdom” included the texts of the selected talks of the conference from two main perspectives –Philosophy and Psychology –in accordance with the sections of the conference. After four years, on November 22-23, 2016, the aforementioned institutions orga-nized a new international conference Life and Philosophy, unfortunately, this time without Academician Georg Brutian, therefore dedicated to his memory and 90th anniversary.

The conference was likewise large in its geographical coverage and participation. Brutian disliked birthday celebrations and honoring ceremonies and he would havenever allowed celebration of his anniversary. Thus, it was a kind of predestination, even after his death he stays still true to his motto – always supporting and helping his students, colleagues, young scientists, once more creating a platform for demonstrating their scientific achievements, acquiring international recognition, and raising the level of academic confidence.