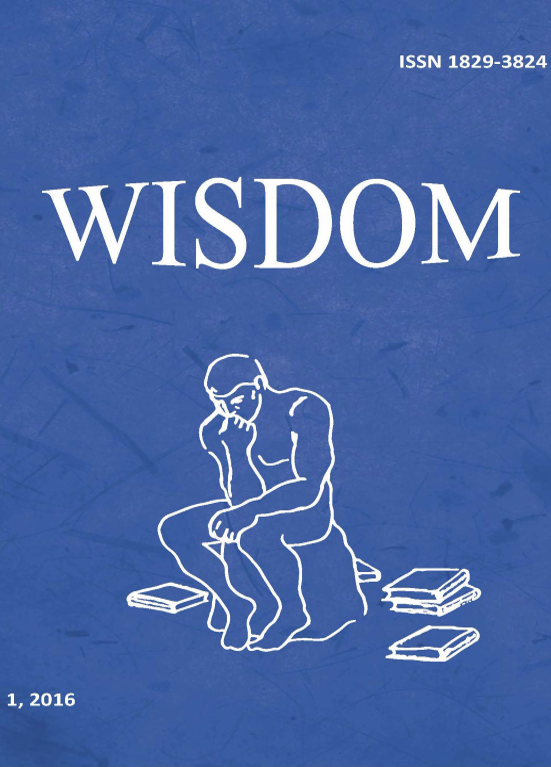 The current volume includes four sections which comprise articles devoted to Metaphilosophy, Philosophy of Science and Epistemology, Social Philosophy, Issues of Social Transformations and Progress. Both in December 2015 and February 2016, World’s philosophical community suffered two losses of Armenian philosophers: the founder of International Academy for Philosophy, Founder-Editor-in-chief of “Wisdom”, Academician Georg Brutian, and member of International Academy for Philosophy, Professor Haig Khatchadourian who also had significant contribution to the publication of the journal by the relevant novelty of his scientific ideas and research works. Thus, we were obliged to think of a new rubric “In Memoriam” to pay tribute to our late Colleagues and Associates – hopeful to refer there to as few names as it is possible. We keep publishing new research works of renowned scientists of international recognition, stimulating discussions over their works. At the same time, we are consistent in opening up the papers of young researchers to the wide scientific community. “Wisdom” expands its indexes of availability to the scientific community and representation throughout international electronic platforms. We have been involved in the list of scientific periodicals recognized by the Supreme Certifying Commission of the Republic of Armenia among other rated periodicals that address fundamental results and theses of dissertations (Doctor of Science and Ph.D. degree dissertations). “Wisdom” is registered in Scientific Indexing Services (SIS), Journal Impact Factor (JIF), Eurasian Scientific Journal Index (ESJI), Scientific Journal Impact Factor (SJIF), International Scientific Indexing (ISI), European Reference Index for the Humanities and Social Sciences (ERIH PLUS), and Advanced Scientific Index (ASI) databases.